Self Defence In Indian Cyberspace 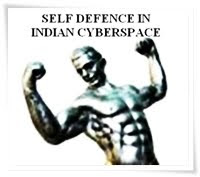 In the present e-surveillance scenario of India, at least two things are very clear. First is that the Government of India is not going to enact any law(s) regarding Data Protection and Privacy Protection in India. This is because the moment it enacts these laws, it cannot engage in illegal and “Unconstitutional” e-surveillance activities as it has been doing presently. The second is that it would further increase its e-surveillance activities in the near future with Projects like Aadhar/UID Project, NATGRID, CCTNS, etc.

Now the service providers like ISPs, Telecom companies, Google/Gmail, Skype, Blackberry, etc have to either accept the Indian Government’s demands or they must cease to carry on their operations in India. Obviously, all of them have accepted the first choice and are “Cooperating” with Indian Government.

India does not have any “Lawful Interception Law”. All it has is the “Unconstitutional” provisions of the Information Technology Act 2000 (through IT Act 2008 Amendments). Through these amendments, the Cyber Law of India has been made an “Instrumentality” of e-surveillance in India. There are no procedural safeguards that can prevent the illegal and unconstitutional e-surveillance activities in India.

The only recourse for Indians in such circumstances is to use “Self Defence” and prevent the illegal and unconstitutional encroachment upon their “Civil Liberties” like Right to Privacy. You can do the following:

(2) Use Safeguards like TOR against illegal Internet eavesdropping and sniffing

(3) Use TOR for instant messaging (IM) and mobile phones for private and secure conversations,

(4) For Blackberry users and those believing in a good combination of Privacy and Security, use Pretty Good Privacy (PGP) along with any good smart phone. This way you can have a better and e-surveillance free mobile infrastructure than the future controversial Blackberry phones.

(5) Use Enigmail for encrypted e-mails,

(6) For card holders, do not give your “Biometric Details” to Unique Identification Authority of India (UIDAI). This way your private and crucial details cannot be used for “Unconstitutional Projects Databases” like NATGRID, AADHAR, CCTNS, etc.

These are just “Basic Level Safeguards” and much more are possible and would be discussed subsequently.
Posted by PRAVEEN DALAL at 6:14 AM